I am a runner.

10 years ago I wouldn’t have said that. I’m 45 years old now and when I was in my teens, twenties and early thirties, I had no desire to jog. Just wasn’t my thing. One reason was because I’d always had bad knees and I’d been told that running was bad on your knee joints. Also, back in 2002 I had a herniated disk and I didn’t want to aggravate it. But when I was working at Network Solutions/Monstercommerce they had a little workout room that had a treadmill. A couple days a week I’d swing by there and jog about a mile on it. I think I may have worked up to a mile and half at some point. 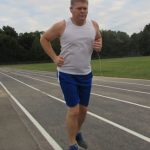 After I left Network Solutions I started jogging around my neighborhood. I’d do a mile. Maybe two. There was a couple decent size hills that I hated running up. Running down was fine. Running up not so much. Eventually, though I worked my way up to a 5k. From there it was a year or two before I started getting to around 5 miles. Now I run twice a week. Five miles without stopping and then a quarter mile walk to cool down. I try to throw in 100 roundhouse kicks on the straightaways after some of my runs to keep some muscle memory from when I used to do Tae Kwon Do.

The weird thing is that, after years of running, my knees are fine. Oh sure, I’ll get the occasional pain but it’s only been bad enough to wear a brace a few times. And even then, I’ll only wear it for a week or two before I can go without it. And my back feels good as well. No issues there.

I’ve run one 5k marathon so far and that was the Glo Run back in 2014. My time was 26:10 which is pretty darn good for me! At the time I was dieting and was about 13lbs lighter. I don’t think I’ll be up for a half marathon any time soon. I’m pretty happy where I’m at right now. If I can bump myself up to six miles on a regular basis that would be pretty good.

There are a few tips that I’ve picked up along the way that I can share:

I like to run on a track. I’ve done road work and probably will in the future. But, as I mentioned above, I hate hills. So, for now, I hit the track. I’m not much of a social runner, either. I kind of like to run by myself. The music helps me and I find it hard to hold a conversation with someone when I’m huffing and puffing and trying to concentrate on my breathing and pace.

Something else that has helped motivate me is that my work has been doing a ‘WashU Moves’ challenge the last year or so. They give incentive prizes for 500k steps, 1 million steps and Personal Best. I’ve been able to get a couple nice sport waistband pouches, a sport dufflebag, a pair of running socks and a tote bag.

Hope these tips help you. Leave a comment about your experiences if you want. I’d love to hear about it! Cheers!