MOMENT OF TRUTH / CODE OF THE STREETS

I never really read Luke Cage when I was collecting and reading comics. I stayed mostly with the ‘X’ titles (X-Men, X-Factor, Wolverine, Uncanny X-Men, New Mutants, X-Factor, etc.), Thor and some others. I had heard about him but didn’t know much of anything about his origins or his powers. I guessed that he was pretty strong but not much else. I was introduced to him in Netflix’s Jessica Jones and really liked his character. I knew that he was going to get his own Netflix series so I read up a little on him and his history. I found out that his history goes back to the 60’s and 70’s during the civil rights movement. He was experimented on while in prison and that was what gave him his super strength and invulnerability. You probably also know that he will star with Daredevil, Jessica Jones and Iron Fist in the Defenders Netflix series.

Seeing him in Jessica Jones was my first real exposure to him. I knew he was going to be a part of the Defenders and have his own series. Episode 1 starts off with Luke, played by Mike Colter working in a barber shop of his ex-wife’s father(?) Pops, played by Frankie Faison, doing odd jobs like sweeping up hair, washing towels and such and being paid under the table to stay off the radar. He gets into a little verbal dust-up with one of the customers named Shameek. Pops knows Luke’s secret and tries to convince him to do more with his power. Saying it would be a waste for Luke to continue trying to scrape by and lay low. 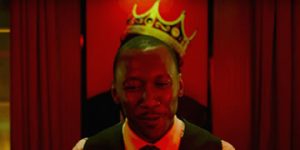 We’re then introduced to the antagonist, Cornell Stokes AKA Cottonmouth (don’t call him that!) played by the very talented actor Mahershala Ali. Who you may also know from his character Remi Danton on House of Cards. Stokes owns a club that he financed from money his cousin, the Congresswoman for Harlem Mariah Dillard (played by Alfre Woodard), fronted him from her campaign. He’s in the process of doing an arms deal with a guy named Domingo that will get him the money to pay her back.

Luke is also working a night job washing dishes in Cottonmouth’s club. That night, one of the bartenders calls in sick and Luke’s boss, who’s paying him under the table, tells him to stand in for him. Knowing his history with running a bar. While tending bar, Luke serves an attractive woman who seems to have an interest in Cottonmouth since she keeps looking at him in the loft. Flirtatious banter ensues with both of them ending up at his place.

A bit later in the evening she gets a call and has to leave. We find out that this is actually Misty Knight. Played by Simone Missick. Misty Knight is another that I hadn’t seen much of. I had seen her a couple times in a guest role in some X-Men comics but that was it. Evidently, the original depiction of Knight was that she was bionically enhanced detective with martial arts skills. Not sure if her character here will follow that. She does seem pretty streetwise and tough.

We find out that the arms deal gets broken up by three thugs with ski masks. Shooting starts and the three thugs kill both sides. One of them starts freaking out about the killing and gets shot by one of the other thugs. We find out the guy who gets killed was the bartender that called in sick, Dante Chapman. The third thug is a latino guy, Chico who works at Pops barber shop, is skittish that Shameek killed the third guy. They take the money and leave. Splitting it between them.

Word gets out quick that the deal went south and Cottonmouth starts looking for who’s responsible. Dante didn’t die immediately and calls Cottonmouths guy Tone and fingers Shameek and Chico.

Shameek is careless and is found in a strip club blowing through his take. Tone gets wind of it and goes and gets him to bring him to Cottonmouth.

In one scene, we see a guy that Luke refers to as ‘Shades’ and a brief flashback to he and Luke in prison orange jumpsuits in jail. I’m sure we’ll get more details on that later but Luke freaks out at the sight of him.

Cottonmouth beats Shameek to death when he won’t reveal where Chico is with the other half of the money and dumps his body on the street. 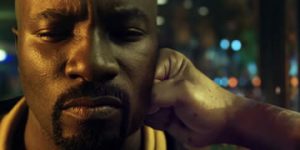 Towards the end of the first episode, Luke breaks up a shakedown of the oriental restaurant owners that Luke rents an apartment from, from about 4 of Cottonmouths guys. They find out pretty quick that he’s nigh-invulnerable and super strong. It’s at this point that Luke seems to start changing his mind about laying low and not helping out.

The second episode starts with Luke standing opposite a building when a young punk puts a gun at his head and asks him who he is and what he’s doing there. We find out that’s actually part of the last scene of the episode and it cuts back to present time.

Cottonmouth visits Pops barber shop to see if he can find Chico and the rest of his money. After a straight-razor shave, he leaves. Pops convinces Luke to look for Chico. Luke relents and finds him and delivers a message that, if he could find him after only a few hours of looking, Cottonmouths goons will eventually find him. Chico says he can’t go back.

Misty continues her investigation and starts putting clues together.

Pops reveals that he and Cottonmouth used to be thugs in their youth. Chico shows up at Pops barber shop not knowing what to do. Misty knight shows up just then to see if Pops had heard anything about Chico or Shameek. Luke goes to Cottonmouth and tells him that Chico is at Pops and that Pops wants to talk to him at his barber shop. Cottonmouth tells him he’ll come by the shop same time as before.

Tone takes it on himself to go and get Chico and shoots up Pops barber shop killing Pops and wounding Chico critically. Luke shields a small boy during the shootout. When Tone and Shades go into the barber shop to make sure the job was done and get the money, Luke doesn’t move and tells the boy not to also so they think they are dead. I guess Luke didn’t want to risk the boy getting shot. I kind of think he could have taken both of them out pretty quickly.

Tone goes and takes the money back to Cottonmouth and brags that he took care of business. Cottonmouth is upset at first but figures that Pop’s will be able to rebuild and he’d even anonymously donate to the effort. Then Shades tells him that Pops got caught in the fire and is dead. Cottonmouth throws Tone off the top of the building they are on in a fit of rage.

Misty Knight shows up at the barber shop and notices that Luke has bullet holes in his clothing but no visible injuries. Luke doesn’t explain why and Misty leaves with more questions.

The episode ends with the scene mentioned above with the young punk holding a gun to the back of Luke’s head asking him why he’s there and calling him the ‘N’ word. Luke admonishes him and dares him to shoot him. When he doesn’t, Luke takes the gun away from him and shoots himself in the abdomen. When the punk sees it bounce off and no injuries he runs away. The last scene shows that he’s outside of the Congresswoman’s headquarters when he sees her car pull up and her get out with Chico’s dufflebag of money. He’s putting the pieces together.

I’m liking the series so far. It’s fairly grounded and Luke is a likable guy. There are a lot of references to black culture and history and, admittedly, I didn’t know some of what was being talked about. Especially when it was concerning basketball or rap. But I did like that there seems to be a good moral grounding with the character.

I am interested to see what kind of challenges can be put up against a man who can’t be injured and is super strong. I guess they can go after people that he loves or cares for. But he’s already lost Pops.

All in all, I think that Colter does a great job with the character. He has the acting chops, size and presence that fits the role and I’m interested to see what he does with the rest of the season.