The big 4 show CW crossover event is finally here! I’ve been looking forward to this since I’d heard that it was coming a couple months ago. And when I heard it was going to be the INVASION! story line from DC comics, I was particularly stoked. I’d read most of that story line back in the 80s when it originally came out. Unfortunately, my memory wasn’t all that great at recalling specific details. I knew it had to do with a race of aliens called the Dominators that had big teeth, yellow skin, pointed ears and a big red circle on their foreheads. The bigger the circle the more important you were in their caste hierarchy. To refresh my memory I found a digital version of the INVASION! comics and started reading them.

One of my biggest ‘beefs’ with this 4 way crossover event is that, technically, it’s not a 4 way. I know, I know. I heard people saying how it will only be the last couple minutes of Supergirl and stuff. But I really question if that even really qualifies because they had the exact same scene in the Flash episode the next day! I guess, since it’s all four shows and Supergirl will factor in with Flash, Arrow and LOT then that’s more what qualifies it as a 4 way crossover.

That aside, I’m not liking how there’s little to no buildup on the part of the Dominators. With the exception of Future Barry’s audio message to Rip Hunter, there was no mention of them, their plans or agenda. They literally just fell out of the sky. In the comics they are worried about the increase of metahumans that Earth is producing and team up with several other alien races to, essentially, destroy earth and it’s ability to create metahumans. You knew that from the outset of the comics. But here, you have no idea what their goals are other than some old footage about them showing up in the 40s, having a firefight with the military and leaving again. 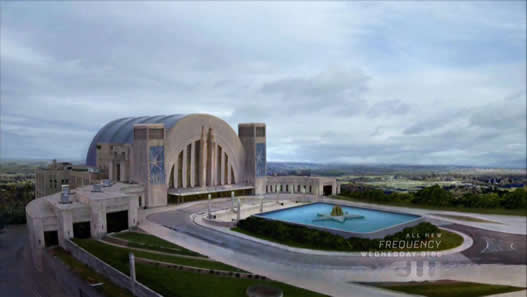 Anyway, I don’t want to down on the whole thing so here are some of the highlights (good and bad) for me in no particular order:

Looking forward to the next two episodes. Arrow’s is the 100th episode and it seems like he’ll be stuck in a Dominator stasis pod for most of it while he plays out an alternate reality of his own in his head where he didn’t go on the yacht and his parents didn’t die. He didn’t become Arrow and he’s engaged to Laurel. I suspect it all goes awry and they bring back some villains like Deathstroke (but I doubt that Manu Bennett will be under all the armor. He hasn’t indicated he’s done any shooting for it but it could be hush-hush.) to torment him. We’ll see how much of the episode gets eaten up with that. But I hear it’s supposed to help Oliver get closure on a lot of his angst.